My goodness, that was a rather depressing previous post, wasn’t it?

All right, let’s talk about something much more interesting and delightful: INTJs!!

I found another resource for defining INTJ traits, and this one is the most “me” yet, I think. Puts to rest most doubts I’ve had that I am really an INFJ. (When in fact, I am an individual. Huh. Go figure.)

I really love this part: INTJs are the type MOST likely to . . .  1. Miss what is going on around them because they are lost in thought.

True story: Freshman year of high school, I was called into the principal’s office during the first week of class. It was a new school for me, I knew almost no one, and I was absolutely terrified. Evidently, a girl in my math class had been verbally harassing another. Because my assigned seat was located close to both of them, I was expected to be a witness and provide evidence. I was never aware of this behavior, because guess what I was doing in math class? Paying attention to the teacher and doing my work–and apparently doing it with the typically intense focus of an INTJ (though of course I didn’t realize that part at the time). I told the principal, in all honesty, that I didn’t know what he was talking about, and had heard and seen none of this alleged bullying. Naturally, he was very skeptical. I foolishly told my mom about this–not to make her do anything, just in a “hey, this thing happened” way. But she felt compelled to go to the principal and tell him how I have a capacity to be focused to the point of tuning out my surroundings, and so I was most likely not lying to him when I said I had no idea what else was going on in the class. Nothing else came of the situation–for all I know, at least. Because I mind my own business. 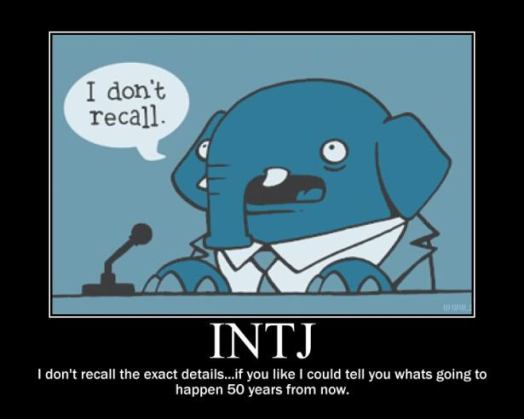 I had a more recent experience where my INTJ came out in abundance. Two common traits of an INTJ: 1.) practical application of the knowledge they acquire, and 2.) stepping up into a leadership role, not just to be in charge, but when they see it is needed.

A few weeks ago, I was spending an evening with some friends (two married couples, natch) that included a meal of breakfast-for-dinner. The couple who was hosting got into an argument over a half-carton of eggs. Husband wanted to use up this carton before using the new, full carton, while Wife fretted over the dangers of consuming the less-fresh eggs. Husband’s attempts to convince Wife that he had eaten from the half-carton the day before and had suffered no ill effects were to no avail. The other three of us watched awkwardly as tempers and voices rose, until finally I shouted over them, “OKAY. HERE’S WHAT WE’RE GONNA DO.”

Here is where I took charge to use some recently acquired knowledge. According to several online sources, egg freshness can be tested by putting them into a bowl of water. If the egg sinks fully, it is fresh. If the egg sinks, but stands on one end, it is still fit for consumption, but should be used soon. If the egg floats, it should be thrown away.

We conducted the test on the six questionable eggs, finding that all of them stood at one end. We used all six of them (and more from the fresh carton) and no one got sick. I have to admit, I’m proud of this one, mainly because I’m usually not great at conflict. In this case, Husband was justified, Wife had peace of mind, and INTJ had the satisfaction of being right, as always.

And since I’m talking about INTJs on 22 November, I feel I must point out the date’s significance as the day the world lost one of my favorite INTJs ever.

9 thoughts on “Further Evidence That INTJs Are Awesome”