Sorry, I thought I was going to have a new hospital-story post up sooner. It’s not because I’ve had a relapse, it’s just because I’ve been lazy and also suffering some ridiculous mood swings recently. I just didn’t feel like writing.

Quick General Update: I’m getting better every day. I haven’t used Vicodin since Day 3 after surgery (this is Day 6, btw, if you count the Day of Surgery as Day 0). The pain decreases every day with just the occasional ibuprofen, and I’m driving again. I’m back home in my regular apartment, and my diet is generally back to normal as well.

And now for the funny stories:

1.) When I was waiting in the ER to be moved to the room where I would then wait for surgery (and where I would also wait for discharge after the surgery), a hospital employee came in to have me sign some administrative forms. She asked me what I was in for, and I told her I was going to have my gallbladder out. She told me she’d had hers out, and that it was an easy surgery with a quick recovery. I would, however, have a few scars here and there on my belly.

“Well, I already have stretch marks,” I said with a casual air, “so that won’t make a difference.”

“Oh!” The woman gasped, having just realized something. “Yeah, compared with childbirth, it’s nothing.”

“Okayyy,” I say, a little confused at the sudden mention of childbirth. When had I mentioned childbirth? I sign the papers where indicated and give her back her pen.

“Good luck with the surgery!” she tells me. “But if you’ve had kids, it’s gonna be so easy.”

And she leaves the room, mistakenly believing that the reason I have stretch marks is because I’ve been pregnant. And not, you know, because I’m just fat. Thanks, lady. Excellent deductions.

I’ll probably have even more stretch marks on my belly now, having been inflated like a balloon with carbon dioxide, which is standard procedure for gallbladder removal, as it allows the cameras to get a better look inside. And by the way, it takes a couple days for that gas to work its way through the body. In the process, it causes what might have been the worst pain I’ve ever experienced, bringing me to tears several times.

If that is “so easy” compared to childbirth, I’m thinking of having my uterus torn out while I still can. 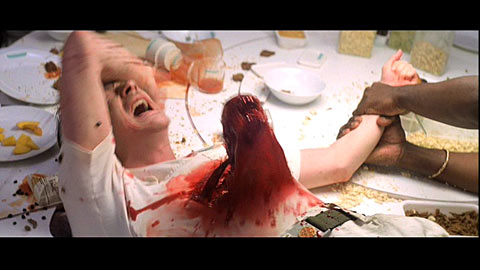 2.) I said my hospital experience involved cute guys. There were, in fact, two of them. The surgical resident was tall, dark, and handsome (and married), and he will play a greater role in the upcoming Sherlock Edition blog post of surgical stories. (The surgeon who removed my gallbladder was the teaching physician, and there were students observing the procedure. I signed a document allowing it, but the less I think about that, the better.)

After waiting all day in the ER and then my hospital room, it was finally showtime. A trio of two guys and one woman show up to wheel me down to the OR in my hospital bed. By this time, after all the waiting, of course I’m nervous. I read a lot of medical studies and articles for work, and I have some good ideas of what can go wrong (such as, my head could have caught on fire). The surgery itself was low-risk, I was already healthy, and the surgeon was top-notch, but you know … shit happens. And sometimes it happens to me.

Fortunately, not this time, but as I’m rattling down the hallways to surgery, I didn’t know that. I was nervous and scared, because I was about to be put to sleep, have tubes shoved in half my orifices, be stabbed multiple times, and when I woke up, I would be in a lot of pain, and missing an organ. And that’s just if it went well.

I swear God just went, “Here, have a cute guy to distract you,” because one of the trio who wheeled me to the OR introduced himself (I forgot his name, unfortunately) as the nurse anesthetist, and wow. I think all I managed was a weak and timid “Hi,” and I don’t know what my face looked like, but I don’t think I can ever make fun of Jane Foster’s googly-eyes the next time I watch Thor. Because this guy was almost as adorable.

And married. Because I was not too in fear for my life to do a ring check.

I decided it was just as well that he was married, since I was looking far from my best and was about to become unconscious. Not the best first impression. Oh well, at least if I died during surgery, the last face I saw would be a pretty one.

It didn’t take away all the nerves, though. The woman said to me, “Oh, sweetie, I can see your heart beating through your gown!”

I looked down at my chest and, sure enough, my heart was pounding so that the thin fabric of my hospital gown shook a little.

“Oh, that’s because of me!” Cute Nurse Anesthetist said. I wasn’t looking at him when he said that, but I’m sure he said it with a roguish grin.

I burst out laughing.

Taken aback and a little embarrassed, I didn’t have the presence of mind to say something like, “It’s funny because it’s true,” or “I’m laughing because if I die under the knife, at least the last face I saw was a pretty one.”

So I just said nothing and kept it awkward. Because I’m so great with the menfolk.

Sorry, Cute Nurse Anesthetist. If you happen to be reading this, you may not have been the real cause of my tachycardia, but you are cute. Your wife is a lucky gal.