The updates, anecdotes, and photographs of my journey across the United States are now not only severely backlogged, but wildly out of sequence. But I had to post about yesterday’s adventures quickly, because they are enormously relevant to my previous post.

The short-version intro is that friend, fellow-blogger, and fellow-Lewis-fangirl Joy met up with me in the area of Wheaton, Illinois, to venture to the Marion E. Wade Center at Wheaton College. The reason is that this building houses a large number of materials associated with C.S. Lewis and other authors connected to him, including G.K. Chesterton, J.R.R. Tolkien, and Dorothy Sayers. It was originally going to be a stop on my road trip, but it turned out to be a sort of day-trip away from Milwaukee before I came back.

What we found within was nothing short of MAGIC. 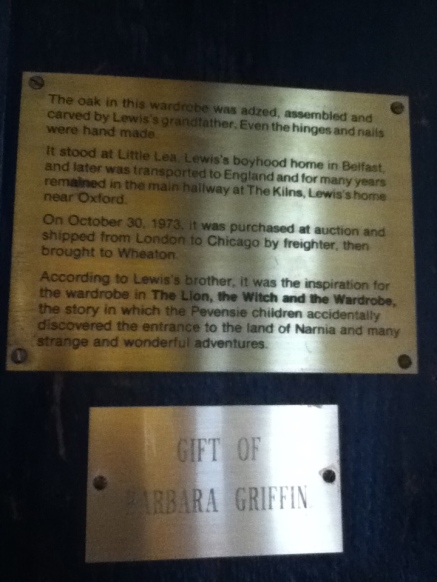 (Sorry about the poor quality of some of these photos; they didn’t allow flash photography so that left only my iPod.)

After browsing the more public areas, we entered the sacred Kilby Reading Room, which has every book Lewis wrote, every book written about Lewis, and probably every book that mentions his name. The same goes for the other authors featured at the center, as well as books remotely relevant to their subjects, such as mythology, the Christian faith, English history, and murder mysteries.

By now you’re probably wondering if I’m ever going to get around to explaining how this is all connected to the last post, except that Lewis obviously features prominently in both of them. So here it is: Once we had browsed the reading room, signed papers to mark our presence and promise not to damage anything, I settled down with an annotated edition of The Screwtape Letters, and Joy chose a slim volume titled Hamlet: The Prince or the Poem? It was the published transcript of a Shakespeare lecture that Lewis delivered on 22 April, 1942. Within, she found this gem:

When I tried to read Shakespeare in my teens the character criticism of the nineteenth century stood between me and my enjoyment. There were all sorts of things in the plays which I could have enjoyed; but I had got it into my head that the only proper and grown-up way of appreciating Shakespeare was to be very interested in the truth and subtlety of his character drawing. A play opened with thunder and lightning and witches on a heath. This was very much in my line: but oh the disenchantment when I was told—or thought I was told—that what really ought to concern me was the effect of these witches on Macbeth’s character!

I am not exaggerating when I say that I almost shed tears, I was so delighted. It might have less of an impact out of context, but it comes close to summing up my last blog post, only using Shakespeare rather than art films. I believe it is further evidence that Lewis would have agreed with me. And maybe I was wrong–maybe he would go see Guardians of the Galaxy.

2 thoughts on “Two Fangirls on the Loose”