…granted, my child has scales and a tail longer than her body, but still. 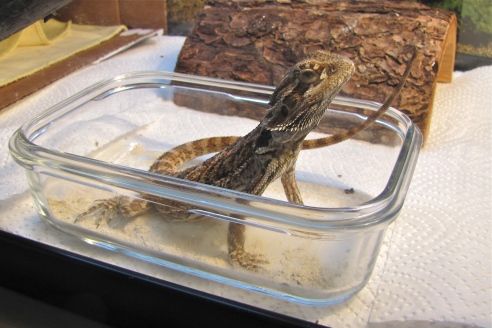 That’s more like it. (She’s sitting in her food dish, wondering why there aren’t more bugs in it.)

Aravis is a (reportedly) 6-month-old female bearded dragon that I adopted via Craigslist from someone who didn’t have time for her anymore. I felt sorry for the previous owner until I got her home and had a better look at her less-than-ideal living conditions. But I have since rectified that, and she is healthy and eats, sleeps, poops, basks, and reacts just as she’s supposed to. She’s still very skittish, though, but I’ve only had her for two weeks, and she is still a young’un, so she’s jumpy and excitable. Last time I measured her she was 10.5″, an inch longer than the first time I measured her.

Here, she is mad that I made her take a bath.

And here, she is exhausted from a hard day of dragon-ing.

She is officially my first pet as an adult, and I think she’s adorable. And yes, I named her after Aravis in C.S. Lewis’ The Horse and His Boy. Bearded dragons are desert animals, and I wanted her to have a literary name, so I thought it was appropriate. (If it turns out she’s actually male, I will change her name to Shasta or Eustace.)

5 thoughts on “In Which Our Heroine Is Now a Mommy”