When I was driving from West to East in July 2014 after completing the Oregon Trail, I passed through South Dakota. I had plans to see Mount Rushmore and Wall Drug, but little else. The scenery was gorgeous, though I didn’t love it as much as I loved Montana. (I was excited to see a sign declaring an area one of the locations used for filming Starship Troopers, but not enough to stop and take a picture.) I was cruising I-90, having already seen Mt. R. and Wall, when I saw signs for something called “1880 Town.” After some indecision over the $12 admission fee (which I later decided was a bit too much to be worth it), I paid and went in.

Much like 2013’s trip to the country village in Mumford, NY, this “pioneer town” is a mix of original 19th-century buildings moved to the site and period-themed structures built on the site. Some buildings were originally sets for a Western movie.

This is one of the many places out West that was (or would have been) utterly charming and delightful 40+ years ago, when family road trips were a cultural staple and Americans were more easily entertained. I could imagine a family rolling along the highway in their big Buick, stopping for a picnic and to stretch their legs by playing a non-PC game of “Cowboys and Indians.”

I hope the pictures sufficiently convey how “Tetanus Town” would have been a more suitable name. Most of the buildings are in a state of disarray at best and moderate decay at worst. Rusty nails and splintering wood jut out everywhere, rickety stairs are left open for climbing, probably-lead-based paint is peeling, and borderline-feral cats roam the property.

The “best” part is that there are equally run-down mannequins posed in some of the buildings. I first discovered this in the “jail house,” when I had a heart attack after seeing a pair of legs sticking out from under a sheet on the bed. I didn’t get a picture–I was too creeped out–but just look through these bars and imagine you see a pair of legs. 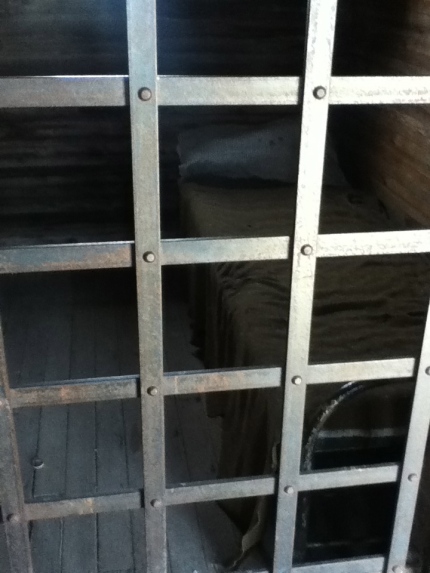 The second mannequin jump-scare occurred when I turned around the corner in the old hotel (one of the original buildings) and saw this:

To be fair, there are some cool parts in the old hotel.

Still … if it wasn’t for the fact that it was a beautiful day, and that there were other tourists present (including families), I would be a lot more surprised that I came out alive.

As capitalism would have it, the building in the best condition is the one that sells stuff: the saloon/hotel where you can buy sarsaparilla at the bar and rent 1880s-esque costumes for the day for whatever twisted photo ops you desire. They also have actual, local entertainment show up occasionally.

I think my favorite part of the saloon was exploring the upstairs, where I found a rather … disreputable-looking room …

Another “feature” of 1880 Town is that it boasts the largest collection of Dances With Wolves memorabilia. I’ve never seen that movie, but it was kind of cool to see Kevin Costner’s chair.

They even have the mules used in the movie (so they claim).

They also had a lot of random historical stuff, much of it of local interest.

All right, well … maybe it was worth it after all. It was definitely one of the more enjoyable parts of the West-to-East leg of my journey.

2 thoughts on “Flashback: South Dakota and the Old West”