I realized that I had more photos that I remembered, and also that, upon rereading my initial intro for this blog post, I’m a filthy liar.

Day Nine, Thursday June 19, I did my morning work, used the hotel pool, checked out, and headed over to the Fort Walla Walla museum. This was a cute local museum that had more than I was expecting. There was a room full of Civil War-related items, but as I’m not big on the Civil War, I gave it a pass. They had clothes and other items (including medical equipment) that had been donated by locals. They also had photographs of the graduating classes from a local nursing school, and lots of exhibits on farm equipment.

There was also an outdoor “pioneer village” set up with buildings that had been collected from the area. Although it was a lot of fun, there was a bit of a “been-there-done-that” feel to it, so I didn’t take a lot of pictures. Although the park area around the fort/museum was very pretty:

So, funny story. Almost every time I mentioned my Oregon Trail trip to my friend Kara, she would remind me that I was going to be near Mount Hood. I didn’t know much of the geography and natural landscape of the Northwest before I went out there, and I thought Mt. Hood was going to be one of a chain of mountains, and so I was like, “Well, I won’t know which one it is, so it probably won’t matter.”

But as I drove from Walla Walla, WA, to The Dalles, OR, my car rounded a corner on the highway, and …

After I got to the Dalles and another less-than-great hotel room, I was tired but it was early so I decided that my hair color needed a touchup. So I bought a box of coloring from the Walgreens down the street and spent the evening coloring my hair in a hotel room. I felt like an Alfred Hitchcock protagonist.

So the next day, June 20 . . . that was fun. I got up, did work, checked out of the hotel, and drove to The Columbia Gorge Discovery Center, just west of the hotel, and it was one of the top three museums I saw on my trip (to and from Oregon).

It started with the third rainbow of the trip. 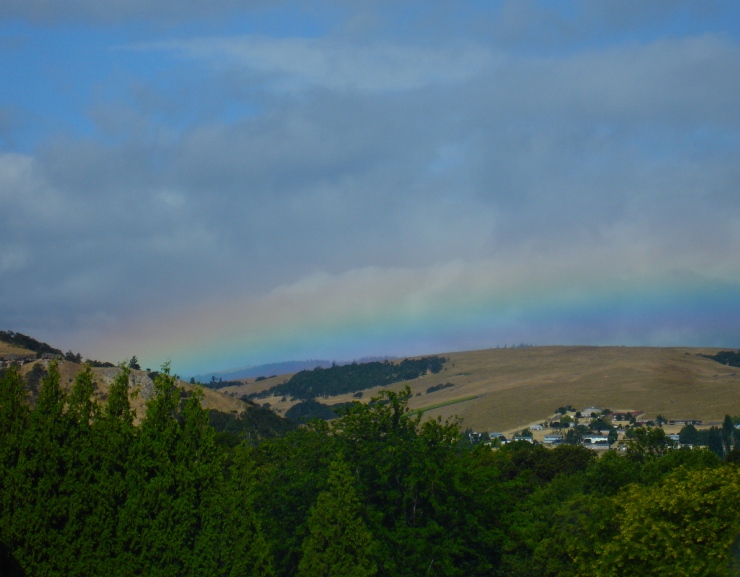 The museum provided history of the Columbia Gorge, including natural history dating back to the Ice Age.

The Game of Thrones fangirl that is still lurking within me somewhere had a bit of a moment . . .

In several places, the Oregon Trail overlaps with other historic trails, including the Pony Express Route, the California Trail, and the Mormon trail. At the Columbia River, it overlaps with Lewis and Clark’s famous journey, so naturally there was an exhibit for them in the building, as well as very entertaining and informative film shown periodically in the auditorium (bonus points for both Lewis and Clark being played by cute actors). It made me want to learn more about them (and possibly drive the Lewis and Clark route someday) and about Sacagawea, who was a frickin’ badass.

I think the one major complaint I had about the museum was a lack of labeling. There were a lot of items on display in the Lewis and Clark exhibit, but nothing to indicate whether they were authentic items that the explorers had carried with them, or just historically accurate reproductions.

There were also exhibits about the industries that were developed in the area, the growth of technology (woo, steamboats!) and towns, and of course a reminder of how dangerous the Columbia river was for the Oregon Trail emigrants.

There was also a lot about the construction of the Historic Columbia River Highway, which I had the good fortune of driving along for a stretch after leaving the museum.

The discovery center also houses several types of raptors. These birds are found in the wild, but kept at the center because they otherwise would not survive, like the red-tailed hawk with a gimpy wing, and used for educational purposes. They had a “show” with a couple of the animals, and the great horned owl kept staring at me. 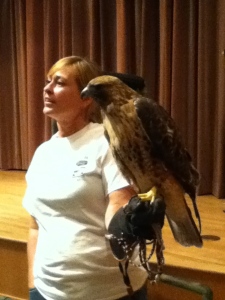 The area surrounding the museum was also gorgeous.

Eventually it was time to head out … along that exhilarating historic highway, so close to my journey’s end.

Although June 20 (the day these last photos were taken) is when I technically reached Portland, of which Oregon City is now a suburb, I didn’t reach the official end of the trail until June 21. That’s the next post. ;-)