I reached Portland, OR, the late afternoon of Friday, June 20, so in a way, my cross-country journey ended then. However, I did not arrive at the official “End of the Oregon Trail” in Oregon City until the next morning, Saturday June 21, when I met up with old college friends Elizabeth and Michelle for one of the best days since leaving Marcella and Phillip in Kansas nearly a fortnight earlier. 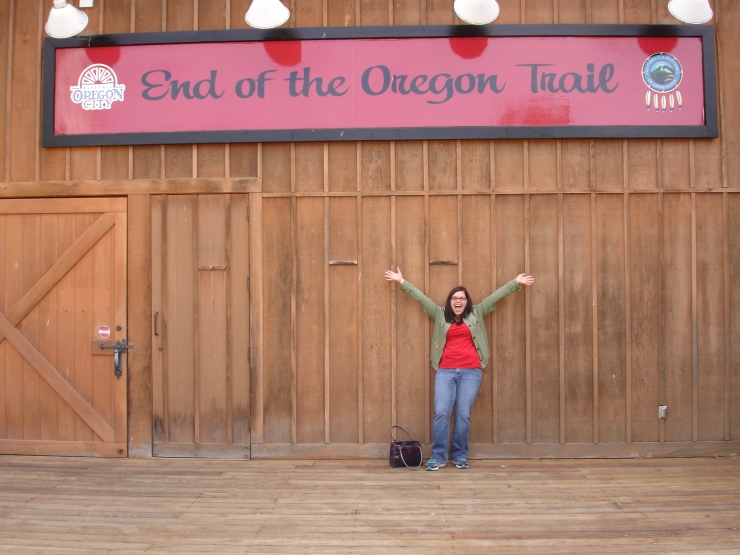 Given that it was at the freaking end of the Oregon Trail, this particular “interpretive center” was a little disappointing. It takes up a good amount of room, but the exhibits feel small, with little information that was not already available at other sites along the route. I knew from reading TripAdvisor reviews that they had undergone a recent renovation, as well as budget troubles, and it kind of shows. As much as I hated Casper, WY, the National Historic Trails Interpretive Center there was one of the best I saw in those 11 days, as was the National Historic Oregon Trail Interpretive Center in Baker City, OR.

I will say that the End of the Trail museum had a section about Oregon roses that was very informative, concentrating especially on roses brought across the continent on the Trail. I did not know that roses are kind of a big thing in Portland. There is also an exhibit that takes a look at some of the real individuals who traveled the trail, and what they did upon arriving in Oregon. For example, Tabitha Brown traveled the trail when she was 66 (already past the average life expectancy in those days), helped found an orphanage, then helped found Tualatin Academy, which eventually became Pacific University in Forest Grove. She also became known as “The Mother of Oregon” and had a WWII Liberty ship named after her. So yeah, age is never an excuse!

The area around the interpretive center was also very pretty…

…and the gift shop was well-stocked with themed merchandise.

The venue also featured a movie that described the journey on the Oregon Trail, and although the voice acting was hit-and-miss among the cast, there were some very moving moments. One part talked about how the pioneers often had to jettison weight from their wagons. There was a voiceover about a man who cried when he had to dump the rolling pin that had been his mother’s, and how she used it to make the best biscuits, and I definitely cried, too.

After a cruise through the museum, we parted ways—Michelle and I went for lunch in downtown Portland, and later I met up with Elizabeth for dinner. It was a fabulous day full of good conversation and catching up, and seeing some of the sights, like Portland Saturday Market and a naked bike ride. (This was especially funny because in Milwaukee, Laurel and her mother were shocked to see an underwear-themed bike ride, and I was just like, “Pssht, amateurs.”) I don’t think I had seen either Michelle or Elizabeth since our graduation seven years ago. If you want evidence of the benefits of social media, I submit that entire day in Portland, which probably would not have happened without Facebook.

A few people who don’t know me very well were convinced that I would fall in love with Portland. Although I thoroughly enjoyed my time there, the city itself did not impress me. Part of the reason is that I’m not cool/hipster/hippy enough. The types of jobs, food, art, and other recreational activities that draw many people there are not something that I’m interested in. I’m starting to realize that I have simpler tastes than I previously believed. Another reason was that, after spending 10 days driving through small towns, mountains, farms, and ranches, I came to really enjoy less-populated areas. Although I loved the drive along the Columbia River, I found Portland absolutely suffocating. I would definitely go back for another visit, but I’m not cruising Craigslist for apartments just yet.

And there you FINALLY have it, two months later, an account of my final (very successful) day on the Oregon Trail!

2 thoughts on “At the End of the Oregon Trail”