Welcome to the first post of what I hope to be a monthly series about the unfamiliar, the unusual, or the downright creepy in human history! If you have an idea for a future post, feel free to leave a comment suggesting a person, event, or idea you think more people should hear about.

Photographic technology has advanced rapidly in the last two centuries, from the daguerreotype to the selfie stick. It’s cheap and easy to accumulate memories of loved ones. But in the Victorian age (mid and late 1800s), it was a little more complicated. How do you preserve a memory of your loved one to remember them by once they have passed on, if you can’t take a picture? You turn their hair into flowers, obviously.

Keeping a lock of a loved one’s hair was not unusual in centuries past–as anyone who has read or watched Sense and Sensibility could tell you. Nowadays, you might find a lock of a child’s hair in a “baby book.” For an organic substance, hair lasts quite a long time. And given that it comes right off a person’s head and maintains its distinct color after doing so, it’s a very personal and downright intimate possession.

But the Victorians, as was their wont, took this idea to gaudy, sentimental, and creepy extremes.

History buffs who have toured historical homes decorated in a Victorian style may have encountered hair wreaths. These hirsute works of art involved twisting and weaving the locks into flowers and leaves, often with beads or pearls added, to be displayed in parlors as family heirlooms. Hair was donated by living family members, or gently snipped off the deceased, and the wreaths were crafted and added to over the years, becoming a symbol of family unity. And despite what you may have heard about the Victorians’ uptight, rigid ways, they were absolute suckers for sentiment. 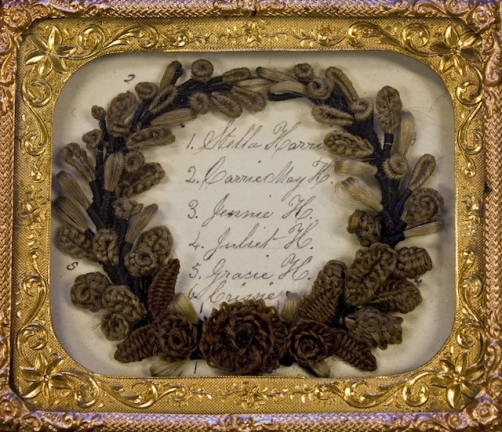 Compared to today’s lifestyles, the Victorians were a bunch of death-obsessed weirdos–they made these things, they had elaborate mourning customs, and they loved to photograph corpses.

But of course, we must keep in mind that death was integrated into Victorians’ lives more than in modern times. Life expectancy was lower, and infant mortality was especially high. (Death was probably the only way you could get kids to sit still during the long exposures that old-timey cameras required.) Disease was more prevalent and doctors made house calls, so people died in their homes instead of hospitals. Without nursing homes or retirement communities, multiple generations shared a home and saw the “circle of life” at work. A child might be born in a bedroom that his grandmother would die in a week later. There were customs and rituals for death just as much as there were for births and weddings, as it was just as much a part of their lives. And making hair wreaths–a skillful art, however creepy–was a creative way to keep the memories of loved ones … alive.

The Victorians did not save hair art just for mourning. In the 19th century, hair jewelry was commonplace, embroidered like thread into brooches or braided into strands to make bracelets.

And if you’re really into that kind of thing, there is a museum dedicated to ‘hair art’ in Independence, MO. Be sure that you stop by before you head out on the Oregon Trail and donate your hair for loved ones to remember you by when you die of dysentery.