This is one of those “general life update” posts, with actual (mostly) good news!!

1.) I got a new job! Less than a month after my previous, beloved job ended, I began a new one with a local marketing agency. This isn’t a telecommuting position, so there is a lot to get used to. Not only do I have to learn the work itself, but I have to get re-accustomed to dressing appropriately, commuting, packing lunches, interacting with numerous coworkers face-to-face, and living on a new schedule. But I like my coworkers, and I will like the work itself once I learn it all and can work independently (i.e., without asking for help constantly). I miss working from home, and my social energy is drained much faster, but I think it will get better as I adjust–and it has made me appreciate living alone much more.

2.) My bearded dragon Aravis, known as “the scaley princess” by some of my friends, is alive and well. However, she is brumating for the season, so she hasn’t been doing much. After struggling to get her to eat and bask and poop normally, I decided to just let nature do what it wanted to do, and I’m letting her sleep as long as she wants. I’ve been waking her up every few days to weigh her and make her drink some water, and she is still healthy and adorable. 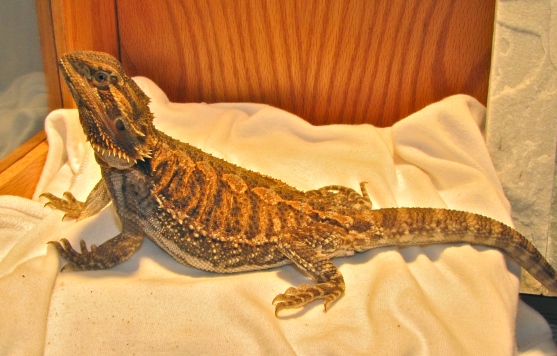 3.) In the less-than-good news front, I had a thought of writing a tribute to Alan Rickman, one of my favorite, favorite actors, who sadly passed away last month. Instead, I am going to link to The Bloggess’ tribute, because she said it just as well, if not better, than I could. (The weekend after he passed, I gathered all my DVDs of his movies with the intention of watching them in order of preference, but I couldn’t bring myself to watch my favorite, Sense and Sensibility. I still can’t.)

4.) So I don’t have to end on that sad note, I wrote the first post in my new, monthly “creepy history” feature. I already have several more ideas for this month and the next, so I think this series can successfully continue for at least this year.