This one is not as obscure as some of the other historical stuff I’ve been writing about, but it’s fascinating and remains incredibly important, so here we go.

As World War II raged in the early 1940s, a team of researchers, led by Ancel Keys, wanted to examine the physical and mental effects of severe, lengthy starvation, and learn how to rehabilitate people with “prolonged dietary restriction.” They hoped to use their findings to help famine victims in Europe and Asia once the war was over.

The Minnesota Starvation Experiment was conducted at the University of Minnesota between November 19, 1944 and December 20, 1945. The Civilian Public Service (CPS) and the Selective Service System coordinated the study. Finding volunteers was a particular challenge. Strong, healthy young men were in short supply, since most of them were in the armed forces.

The researchers ended up with 36 male CPS volunteers. They were conscientious objectors who wanted to contribute to the war effort in non-violent ways. The subjects were all white males, aged 22-33 years old, and most of them belonged to Historic Peace Churches.

The men lived in a dormitory at the Laboratory of Physiological Hygiene at the University of Minnesota. They underwent a variety of tests during the experiment: records of weight, size, and strength; X-rays; blood samples; endurance tests; and psychological tests. The men also were required to keep a personal journal, participate in educational activities, and walk 22 miles a week, burning 3,009 calories a day.

Because the subjects were supposed to lose 25% of their starting weight, which amounted to about 2.5 lbs per week, their individual meal plans (largely cabbage, potatoes, and wheat bread) were adjusted constantly during the starvation phase. In interviews decades later, the surviving study participants recalled feeling great anxiety when the scientists posted each man’s rations for the upcoming week. They could not bear to think of eating even less than what they were eating already.

The men experienced drastic physical and mental changes as their caloric intake became further restricted and their weights continued to decline. One man got stuck in the revolving door of a department store because he was too weak to push all the way through, and had to wait for another customer to use it. The men also said they felt colder, and needed extra blankets during the summer. Other physical symptoms included dizziness, fatigue, muscle aches, hair loss, reduced coordination, and ringing in their ears. Aside from physical weakness and exhaustion, the participants also had less enthusiasm for conversation and activities, and became increasingly irritable with each other, and so became less social. Some men found that they could no longer go to class due to a lack of energy, motivation, and concentration. One man, while attempting to chop wood for a fire, amputated three of his fingers with the axe, and never could say whether or not it was intentional.

The study subjects constantly thought about food, and meals became obsessive rituals. “Some people diluted their food with water to make it seem like more,” participant Robert Willoughby recalled. “Others would put each little bite and hold it in their mouth a long time to savor it. So eating took a long time.” Several men collected cookbooks and recipes during the experiment. Carlyle Frederick reported that he had accumulated almost 100 by the end of the experiment. If they went to a movie, they noticed the food and ignored the romance, because along with the other symptoms, they experienced dramatically reduced sex drives.

At first, the study participants looked no different from other men on the university campus. Over time, however, they stood out due to their sunken faces, protruding ribs, and legs swollen from edema. The study began to gain more attention, and an issue of Life magazine in 1945 included a feature on the study and its brave participants. Although a few subjects broke the agreement and were dismissed from the study, most of them held fast, despite the increasing difficulty, believing strongly that what they did had a purpose. 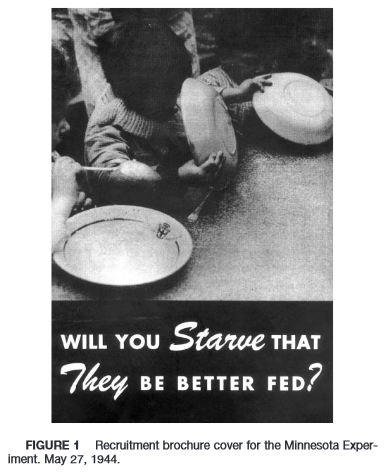 While the study provided a great deal of important information, it was not as helpful to the post-war effort as researchers had hoped. The rehabilitation period lasted from late July 1945 to October 20, 1945. VE Day was May 8 and Japan surrendered on August 14. “We had hoped to have an effect on the world hunger situation following the war … [but] the experiment was a little late,” said participant Earl Heckman. A complete monograph of the study was not published until 1950, but members of Keys’ staff prepared a booklet that provided some practical advice based on early study results. One of the main findings of the experiment was that starving people need lots of calories in order to recover—not a complex mix of vitamins and minerals or a delicate balance of protein and carbs, but pure calories.

Although the men fantasized about the end of the starvation phase of the experiment, the recovery and rehabilitation periods were not the end of their troubles. Some men reported that it took two years to get back to their pre-experiment weight and strength. More food made little difference at first—either to their physical appearance or feelings of hunger. Even in the unrestricted phase, their stomachs felt like bottomless pits. The scientists warned the men not to overeat, but Henry Scholberg had to have his stomach pumped at a hospital because he ate too much. Participant Robert McCullagh finally knew he was getting better when his sense of humor came back.

There are many, many things to take from the Minnesota Starvation Experiment, even today. It taught us how little caloric restriction is necessary before psychological effects set in. (Compare the amount of calories the men consumed during the starvation phase with the recommended caloric intake of many diets.) It also shows that there is no “one size fits all” solution for proper nutrition, exercise, and caloric intake. The scientists were constantly adjusting the men’s rations based on their individual bodies and behaviors.

While it seems obtuse to say that this study shows how much people need food, it is a necessary reminder in our fitness and weight-loss obsessed culture. Food is about more than staying alive. It is part of society and our social behavior and proper nutrition is strongly influential on what we accomplish. Sure, too much food is bad for you, but too much ANYTHING is bad for you. That’s not the same as having “more than enough,” though. If you have “Just enough,” you’re surviving. If you have MORE than enough, you’re thriving. As it turns out, in order to do and be everything we can be as humans and as a society, having just “enough” is actually … not enough. Keys himself argued that, based on his findings, democracy and major cultural advancements were impossible without sufficient food.

This also shows that an obsession with food is literally not healthy. Like the men in the experiment, if you are withholding too many calories from yourself, you may find that food is all you can think of, because your body needs it, no matter what Jenny Craig says. These men weren’t on 500-calorie diets; they were eating the same amount of calories that lots of diets and so-called experts recommend for optimal weight loss. Perhaps, then, most diets fail not because people lack self-control, but because they are simply unsustainable.

Along with this lesson is the idea that weight loss itself is not necessarily healthy. The study participants were healthy when they began, and they all had different weights and metabolisms. With even a relatively small amount of weight loss, they began to show signs of serious problems. Despite the prevailing “wisdom” nowadays, weight loss might not solve all health problems—and might cause more instead.

Finally, this study showed us that a refusal to fight and kill in war does not equal cowardice or a lack of conviction. It might mean just the opposite, as these steadfast participants demonstrated.